Dr. Mahara and his team at Downtown Nanaimo Dental Group and the Rotary Daybreak Club of 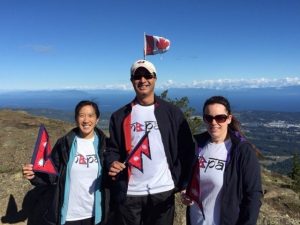 Nanaimo recently combined efforts to raise more funds and awareness for the earthquake victims of Nepal. On Saturday, September 26th, blessed by warm weather and sunshine, Dr. Mahara rallied a group of 21 hikers up to the summit of Mount Benson.

Although the weather was good, the hike was still a challenge for many of the participants and Dr. Mahara and the event organizers were tremendously proud of all of the hikers! With steep sections and some loose ground in spots, the 2 hour hike up to the summit of Mount Benson felt like climbing 4000 stairs! The additional 2 hour hike downward proposed its own challenges – although less of a cardiovascular workout, tricky footing and impact to the knees and joints was felt by most. There were a fair share of minor slips but everyone arrived at the bottom of the hill exhilarated and safe.

Financially, the hike was a huge success, with over $2,000 dollars raised through pledges that the hikers received from supporters from around Vancouver Island. This will be added to the $4,000 plus dollars raised through Nepal t-shirt sales and then matched by funding at both National and International levels of Rotary.

The Rotary Daybreak Club, of which Dr. Mahara is a member, plans to use the funds raised from the hike and from t-shirt sales as seed money to leverage “Rotary International” matching grant scheme to create the maximum value that can be used to support a project to rebuild the basic services in a village in Nepal. Basic services include access to safe housing and drinking water and education.

Traveling to Nepal on a Rotary Club mission to fund some schools in the country of his origin, Dr. Mahara found himself in the middle of the major earthquakes and after-shocks which occurred in April / May 2015.

Arriving back in Nanaimo a few weeks later, Dr. Mahara wanted to help the people of Nepal.  Through his Downtown Dental Group office he held a candle light vigil, designed and sold Nepal t-shirts and now has completed the Hike for Nepal.

To support the ongoing rebuilding needs of Nepal, Dr. Mahara is planning the Hike for Nepal as an annual event held in September of each year. Visit the Hike for Nepal Facebook page to keep up to date with the planning and to participate in the 2016 event! Also, a limited number of Nepal T-shirts are still available for just $20. To purchase, email info@drmahara.com.

Thanks to everyone who supported the Hike for Nepal in one way or another. We couldn’t have done it without you!