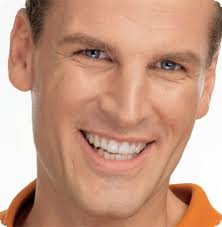 For adults looking to straighten their teeth, nothing could be more of a blessing than a relatively new technology in orthodontics called Invisalign.

I was lucky not to have needed braces as a teenager, as my teeth were naturally quite straight.  In my early 20’s, however, my wisdom teeth came in fully and put the squeeze on my front upper and lower teeth making them slightly crooked.  I didn’t like it, but I didn’t see an alternative to fix it – until I discovered Invisalign.

In brief, Invisalign is a removable system of braces which are nearly invisible.  An Invisalign technician creates a series of aligner trays (that look like thin, snugly fitting mouthguards) that are worn for two weeks each.  Each set of aligners moves your teeth one step closer to the straight position you want them in.

It’s almost like a dream come true – teeth straightening without juvenile looking braces!  I like the fact that I can remove them on my own to eat, clean my teeth and if I just feel like it.  On lookers can hardly even notice that I’m wearing them.

Challenges and opportunities with Invisalign

Although the aligners fit snugly on the teeth and don’t have much thickness, it does take some practice to speak normally.  In my first week I found myself with a lisp, which I used as an opportunity to tell everyone that I was doing some orthodontic work.

For any dentists out there, please note that it’s a great marketing tool to set your Invisalign patients out there to help you spread the word.  Several coworkers were immediately interested in learning more about Invisalign once they saw how non-intrusive it was.

Keeping the teeth constantly clean is another challenge with Invisalign.  I’ll write more about that in my week one experience.  In brief, it really makes you notice how often you snack or consume any sort of beverages besides water because you are supposed to brush and floss each time after doing so.

Why I chose Invisalign

I have to thank Dr. Mahara and his team for encouraging me to go for Invisalign.  Jenna, my hygienist, had mentioned it to me a couple of times during hygiene treatments since plague builds up around crooked teeth.  In fact, after hygiene I often felt like a space the size of the “grand canyon” had opened up in-between my crooked lower teeth.  Did she remove some of the tooth or what?  Nope, just lots of hardened plaque known as tartar.

Dr. Mahara also encouraged me to try Invisalign and he let me know that most of the people on his dental team, including himself, had used or were currently using Invisalign.  There’s nothing like leading by example.

In addition I already knew that Dr. Mahara was constantly undergoing professional development for himself and for his dental team – including extensive post-doctoral training at the prestigious LVI.  There was no doubt for me that he had the skills and experience to do a great job.

I was also swayed by Dr. Mahara’s philosophy which goes something along the lines of, “why just fix up your teeth, when you can transform the health of your mouth and the beauty of your smile?”

Without being pushy, Dr. Mahara gives you your options, including the best treatment option available. I simply chose to take the best option.

Stay tuned for my next Invisalign experience blog post where I’ll describe the fitting process and first week review!