Invisalign technology changed the field of orthodontics since its introduction more than a decade ago.  Adult and teens were 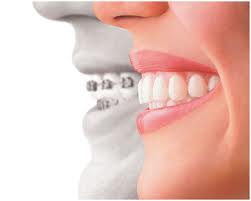 amazed by the fact that Invisalign braces could straighten teeth without the need for metal and wire brackets and the many restrictions and awkwardness that having braces often entailed.

As Invisalign has evolved, it can now be used for increasingly complex orthodontics cases.  In this article, we’ll show you how Invisalign works and give a powerful example of how complex cases are now being treated effectively through Invisalign.

Invisalign shifts teeth into a proper position by using a series of clear aligners made for you by an Invisalign dentist.   Aligners must be worn for a minimum of 22 hours per day to be effective, leaving up to 2  hours per day to remove them for eating, cleaning the teeth or any other special circumstances.

To illustrate the use of Invisalign, here is the case of a patient at Downtown Nanaimo Dental Group.

A young adult patient had been bothered by the appearance of her smile for many years.  She suffered from a narrow arch which 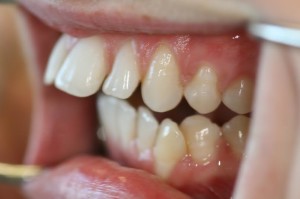 impacted her smile.  In fact, only four teeth were visible when she smiled – while normally 8 – 10 teeth are visible in the smile line.  To make matters worse, the two front teeth extended forward, giving a “bucked tooth” appearance.

Beyond appearance, the position of the young woman’s teeth also caused a functional problem – a misaligned bite.  Although this was not causing pain at the time, it was expected that without treatment, this bite anomaly would eventually lead to jaw pain and other symptoms of TMD.

Given all of these factors, straightening the young woman’s teeth and aligning her bite was complex.   Fortunately, Invisalign technology had advanced enough to be able to tackle this difficult case.  After an Invisalign consultation, the patient researched all other options which included seeking further opinions and exploring the option of using traditional wire and bracket braces for her orthodontic treatment.

In the end, since her job involved interaction with the public on a regular basis, she decided that traditional braces might impact her professional image in a negative way.  She also did not look favourably on the idea of wearing metal braces for 2 years or longer.

After taking time to weigh the options, the young woman finally decided to go ahead with Invisalign.

Less than two years later, the young woman finished her treatment and now she wears retainers at night to keep her new smile

intact.  Now she has a broad smile which shows her front teeth in an oval arch shape giving her a younger look. The excessive overbite is fixed and the patient admits that she cannot stop smiling now!

Get started with Invisalign

Get started by contacting us for an appointment at Downtown Nanaimo Dental Group today.  Dr. San Mahara is a Certified Invisalign Provider and financing plans are available to help make your perfect smile a reality today.  We also recommend that you read more about the Invisalign treatment process on our website and contact us if you have any questions.