Dental fillings are the most common treatment in dentistry.  Used to treat the most pervasive dental problem, the cavity, the dental 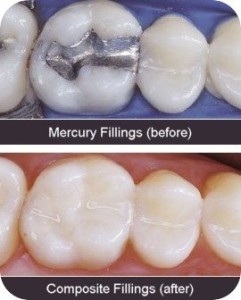 filling preserves the tooth from further damage while simultaneously restoring the shape and functionality of the natural tooth.

Amalgam, or “silver” fillings were the preferred material to fill a cavity for decades.  However, in recent years, new technology in dentistry has created alternatives, and at the same time helped to highlight the disadvantages of using amalgam for dental fillings.

The disadvantages of amalgam fillings

Amalgam fillings are made of a mixture of metals, including mercury.  While the medical health regulators insist that exposure to mercury through amalgam fillings does not pose a significant threat, the World Health Organization (WHO) has stated that mercury is harmful at any level of exposure.

Looking purely at the practical side, amalgam fillings have a couple more strikes against them.  Amalgam fillings require that more of the tooth be removed than other restorative options.  And although amalgam fillings have proven to have the strength to endure chewing, it is equally true that amalgam expands and contracts overtime, which can produce cracks in the tooth and potentially further damage it.

What is the alternative to amalgam fillings?

Fortunately there are some great alternatives to amalgam fillings!  The most common alternative is a tooth-colored compound called composite resin. Also known as a “white filling,” composite fillings are made of a chemically engineered composite material, which has proven to be just as strong as amalgam and to provide some further comparable benefits.

What are the benefits of white fillings?

Due to the way the composite resin filling bonds to the tooth, less of the natural tooth structure needs to be removed during the treatment process. Composite resin can also be colored to match the surrounding teeth, making it a clear winner on an aesthetic level.

Do I need to replace amalgam fillings?

At Downtown Nanaimo Dental Group in Nanaimo, we do not provide amalgam fillings as an option to our patients – we’re proud to be a mercury-free filling dental clinic.  We welcome you to book an appointment today to learn more about mercury-free fillings.